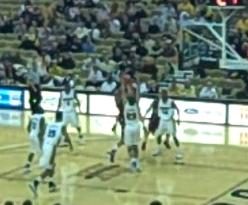 Strong three point shooting in the second half, pressure defense, and shutting down Iowa State’s Craig Brackins led to Mizzou’s  77-46 win over the Cyclones Saturday afternoon at Mizzou Arena.

The Tigers hit four three pointers in the first seven minutes of the second half including two from Marcus Denmon to go on a 13-6 run to open up a 47-28 lead.  Denmon was hot all game going 4 of 6 on three pointers to finish with a game high 16 points.

The Tigers look to be a team that is going to live and die by the three point shot and today, the livin’ was good.  The Tigers shot better from three point range than they did from the floor.  Zaire Taylor was 2 of 4, Keith Ramsey 2 of 2, Kim English 3 of 3, and DeMarre Carroll 1 of 2 from three.

Leo Lyons dressed for the game, but did not start as Mike Anderson went with DeMarre Carroll, Keith Ramsey, Zaire Taylor, JT Tiller, and Kim English for the second straight game over Matt Lawrence.  The Tigers jumped out to an 11-6 lead going into the first television timeout 4:08 into the game, thanks to three Iowa State turnovers and three pointers from Ramsey and Carroll and they never looked back as the Tigers built a lead by as many as 12 in the first half and never fewer than five.

Leo Lyons checked into the game with 13:19 to play in the first half and made his presence felt beating Iowa State’s 6’10 forward Craig Brackins who entered the game with three straight performances of at least 20 pints and ten rebounds.  He would finish with just 10 points on 4 of 11 shooting and wasn’t much of a factor in this game as Mizzou did a good job of throwing two guys at him when he caught the ball in the post.

The final 10 minutes of the first half saw the scoring slow to a trickle as the Tigers were unable to get their outside shots to fall and the Cyclones just didn’t get many good looks on the other end.   Mizzou shot just 29% in the first half, while Iowa State was at 35%, but they turned the ball over 10 times compared to MU’s three.

The cold shooting continued early into the 2 nd half until Ramsey dunked an alley-oop pass from Carroll to push Mizzou’s lead to 11.  After a Cyclone basket on the other end, Taylor hit another three to put Mizzou up 34-22.

Mizzou hit four three pointers in the first seven minutes including two by Marcus Denmon on a 13-6 run to help push the Tigers lead to 47-28 with 12:52 left before Iowa State took a timeout.   From there the hot three point shooting and strong defense continued as the Tigers built on their lead.  The Tigers were just too quick for Iowa never really giving the Cyclones any easy baskets.

The Tigers were 10-14 on three pointers in the second half and finished 14 for 25 for 52%.  Mizzou held Iowa State to 33% shooting.  Denmon led with 16 points, Zaire Taylor 15, and Lyons with 12 and eight rebounds.  DeMarre Carroll grabbed nine defensive rebounds and was a big key to shutting down Brackins.

The Tigers travel to Oklahoma State on Wednesday with an 8pm tip.