There is a new person at the helm of the Missouri Republican Party. Cassville attorney David Cole takes over as MRP Chairman from Doug Russell. 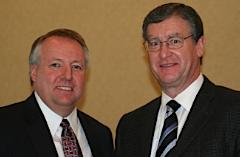 Cole, who chairs the 7th Congressional District Republican Campaign Committee, was chosen by a 68-0 vote of the Missouri Republican Central Committee on Saturday in Jefferson City. Cole had received the backing of Lieutenant Governor Peter Kinder, the Republican Party’s only statewide elected official at the State Capitol.

Cole takes control of a party that had to deal with its share of troubles in 2006 and 2008. In 2006, Republican Jim Talent lost his U.S. Senate seat to Democrat Claire McCaskill. In 2008, Democrats took two statewide seats from Republicans – Jay Nixon succeeded Matt Blunt as Governor while Clint Zweifel snatched the State Treasurer’s office that had been held by Sarah Steelmen.

But the news was not all bad in 2008 as Republicans picked up three seats in the State Senate. Cole now sets his focus on the 2010 elections and finding a candidate to replace four term U.S. Senator Christopher Kit Bond.

Previous Post: « New donation to WWI Museum in KC is a blast
Next Post: Breaking News: Rams to hire Spagnuolo as head coach »