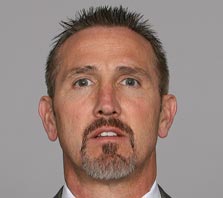 According to NFL.com’s Adam Shefter , the Rams will hire New York Giants defensive coordinator Steve Spagnuolo as their new head coach.  They will pay him $11.5 million over four years.

Spagnuolo was the Giants coordinator the last two seasons and his stock rose dramatically after the Giants defense shut down Tom Brady and Patriots in last year’s Super Bowl.  Prior to that, he worked under Jim Johnson in Philadelphia for seven seasons.

Spagnuolo and Rams’ GM Billy Devaney have been good friends over the years which I’m sure had a big influence on the decisiion making process.