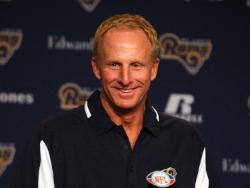 St. Louis Rams General Manager Billy Devaney announced that Rams interim head coach Jim Haslett is no longer a candidate for the position.  "Jim took over an impossible situation," said Devaney.  "He kept the team focused and playing hard and, as an organization, we are much better off for his contribution.

"We decided that, after going through the interview process and in the spirit of that process, it was best to let Jim know that we are going to go in a new direction."

Haslett replaced Scott Linehan as the Rams head coach after the season’s fourth game.  The Rams were 2-10 under Haslett.