Cam Janssen scored his second career NHL goal and Patrick Berglund added his 14 th of the season, most for NHL rookies as the Blues held off the Colorado Avalanche 5-2.

Janssen’s goal gave the Blues a 2-0 lead midway through the second period.  His first goal came back in February of 2008 ending a slump of 58 games without a goal. 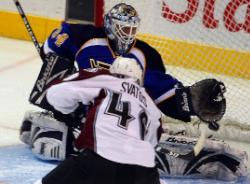 Manny Legace made 24 saves including this one, (Bill Greenblatt, UPI) to pick up his 14 th career win against the Avs.  Colorado coach Tony Granato said, "Legace made the big saves in his net and gave them a chance to get going and they capitalized on their opportunities.  Special teams was the difference tonight.

The Blues one of the better power play units in the NHL scored two goals with the man advantage.  Brad Boyes, T.J. Oshie and David Backes also scored for the Blues.