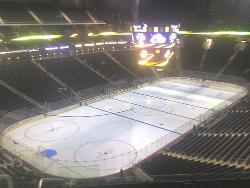 The New York Islanders and Los Angeles Kings will play an exhibition hockey game at the Sprint Center in Kansas City on Saturday, September 26th.  This past fall, the Blues played the Kings in the first NHL game at the new arena.

The thinking behind having the Islanders may be as a way to whoo the team from Long Island who has long taken a back seat to the Rangers and New Jersey Devils.  The Islanders would like to update or replace their home arena, the Nassau Coliseum, but the politics of the whole deal have slowed the process.

The Islanders are 30th in league attendance.  Kansas City has tried to entertain the Pittsburgh Penguins and Nasvhille Predators.