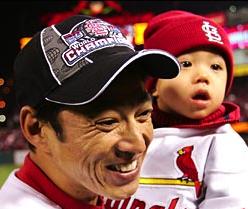 According to the Cubs official website , the team will announce its non-roster invitees next week.  Reports say Taguchi will earn $900,000 if he makes the team in Spring Training.

Taguchi is the latest former Cardinal to join the Cubs in the last couple of seasons.  Jason Marquis, Jim Edmonds, and most recently Aaron Miles have been players who donned the Birds on Bat, in favor of the Cubbie blue pinstripes.