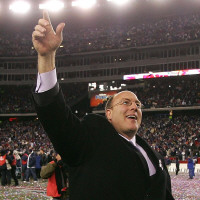 Scott Pioli, the Kansas City Chiefs new General Manager was introduced today at a press conference and was playing it very close to the vest when it came to the future of head coach Herm Edwards.

We should know more about Herm by the end of the week.  I think chances now may be good that he stays on.  Clark Hunt, while he said his GM would have a lot of input was always a fan of Herm and thinks he deserves more time.  Plus one of Pioli’s choices for head coach would have been Josh McDaniels, the former Patriots offensive coordinator who joined Denver as their head coach.