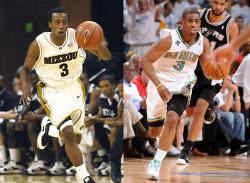 Alright, here is the story on the whole Chris Paul (of NBA fame) is Miguel Paul’s (Mizzou freshmen) cousin.  Turns out the story that Miguel has been telling about Chris isn’t entirely true.

Miguel claimed that Chris was his cousin and encourage Miguel while he was still in high school.  After some background checking, come to find out Chris had no idea who Miguel was.

You can read all about here from deadspin.com