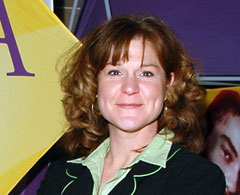 A woman from southwest Missouri has becomes a role model for those hoping to escape poverty and start a new life.

Kimberly Keith has spent most of her adult life in poverty, never earning more than $12,000 a year, often much less. Divorced and a mother of three, including one child with Larsen’s Syndrome, Keith tentatively went to the Ozarks Area Community Action Corporation (OACAC) with a 17-page handwritten business plan. She was shocked when the official at the OACAC Polk County Community Center not only didn’t laugh at the proposal, but read it.

She created a list of obstacles standing in the way of her escaping poverty. Keith began work on the list and that eventually led to creation of the non-profit curb-side recycling company Treasurers Recycling Center. It collects curbside in Humansville and Bolivar, employing 25 people. Keith also manages 60 units of low-income housing.

Keith was part of the lobbying effort of the Missouri Association for Community Action at the Capitol Wednesday. More than 100 members of the group’s network spoke to state representatives and senators on behalf of the poor. They are lobbying lawmakers to appropriate $10 million for energy assistance; $7 million to help the poor pay heating bills and $3 million for weatherization.

The idea for recycling sprang from necessity. After being told that cold air leaked through the outlet plugs of her aging trailer, Keith used discarded Styrofoam meat trays to cover them. That led to using other waste in creative ways.

Keith worries about lapsing back into poverty and says a change in thinking and a change of direction were needed to break the cycle of poverty. A defensive attitude needed to be dropped and a sense of responsibility had to be embraced. Eventually, 18 years of poverty was left behind. She has earned more than the poverty level for nearly two years.

Keith hopes her children learn personal responsibility and won’t have to learn the tough lessons she has.