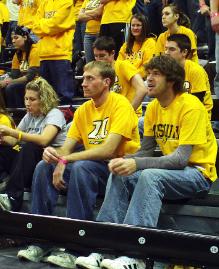 No Leo Lyons or Matt Lawrence starting for the Tigers as they hosted an overwhelmed  Colorado team.  Mike Anderson went with Keith Ramsey for Lyons and freshmen Kim English who got the start over Lawrence.  The result was a well balanced attack and a big 107-62 win over Colorado.  The Tigers are now 1-1 in Big 12 play.  (Even the Zou Crew can’t believe the mismatch)

Colorado kept the game close as they did a good job of collapsing on DeMarre Carroll and played good zone defense.   English started 1 of 2 with a turnover and Ramsey had three points, a rebound, and an assist as Mizzou had an 11-7 lead after the first TV timeout about five minutes in.

Then, Justin Safford and Laurence Bowers came in and quickly established inside presence with two quick buckets to open up a 21-13 lead with just over 10 minutes to play.

Over the next seven minutes the Tigers would build their lead to 37-17 sparked by Marcus Denmon who hit a jumper from the corner and then a no look pass to Carroll who was trailing for the dunk to give Mizzou a 20 point lead with 3:51 to go in the first half.  The Tigers were turning up the defensive pressure forcing CU into 8 turnovers at that point.  It would only get worse for CU from there.

With 3:28 to play, Cory Higgins was at the line, who had hit 45 straight free throws, a Big 12 record and he missed his first attempt ending the streak.  He would come back :33 seconds later and make his next two ending Colorado’s six plus minute scoring drought.   A three pointer at the buzzer gave the Buffs their first field goal since  12:47 of the first half which brought the halftime score to 48-22 .

The Tigers would continue to cruise in the second half.  Six Tigers finished in double figures while shooting 63% for the game.  The Tigers also forced Colorado into 26 turnovers who were playing their first Big 12 contest.  The Buffs shot just 36%.  Laurence Bowers led the Tigers with 16 points, followed by Carroll, Tiller, and Safford with 13 each.   Kim English added 12.

The Tigers are home Saturday against Iowa State.

Previous Post: « The high cost of the uninsured
Next Post: Miguel who? Truth comes out about Chris Paul story »