During the gubernatorial election campaign, candidate Jay Nixon spoke of the need to overhaul the way local motor vehicle and driver license offices are awarded. Now, Governor Nixon has announced a competitive bidding process for the offices, with the bidding already underway for six of the 183 fee offices. 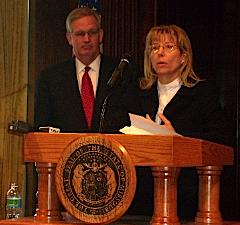 The six offices are those located in Columbia, Liberty, Mexico, Moberly, Saint Charles, and the South Fremont office in Springfield. In making the announcement, Nixon said "the era of license office patronage ends today."

Karen King Mitchell, the Governor’s nominee to head the Revenue Department, says a system in place to determine which of the bidders will get contracts. She says it is a system based on customer service and efficiency.

The administration has put no timetable on completion of the awarding of fee office contracts.