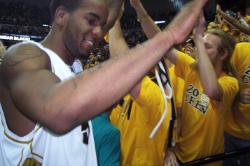 Missouri Tiger senior forward Leo Lyons is suspended indefinitely by head coach Mike Anderson for traffic violations.  While Anderson couldn’t put a time frame on the suspension, he said Lyons will not suit up for the game Wednesday against Colorado.

Lyons was stopped by Columbia Police on Sunday night around 11:28pm and did not have his lights on or proof of insurance.  When the police ran a check, they also found an outstanding warrant for an unpaid fine for a previous traffic violation.  The violation was for an illegal turn.

Anderson said the suspension is all about being responsible, noting this all flared up over a $15 or $20 traffic fine.

This will give younger players an opportunity to rise.  Junior Keith Ramsey may get the start.  You’ll also see more of Justin Safford and Laurence Bowers.  Lyons had started all 16 games and averaged 14.6 points per game, second on the team.

Lyons and Anderson have never really seemed to get along and Lyons is one of those hot and cold players who sometimes just doesn’t seem to be in the game, but his presence will still be missed.  Now, Big 12 teams will really focus on DeMarre Carroll and shutting down the inside the game and with Lyons near 15 points needing to be replaced by Ramsey, Safford, and Bowers who have combined for an 11 ppg average, someone will need to rise to the occasion.