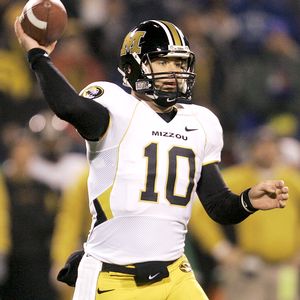 Missouri Tiger quarterback Chase Daniel told the Columbia Daily Tribune that he played late in the season with a sprained ligament at the base of his throwing thumb.

Granted he did make poor decisions, which happened as early as the Oklahoma State loss, but to his defense whether he wants to use it as an excuse, when you have an issue to your throwing hand, it’s going to have some effect on a player.  Daniel says the injury happened at some point in the last four games.  According to the article, Mizzou trainer Rex Sharp said the injury happened in the Big 12 title game.

My guess is the injury could have happened at some point prior to the KU game.  Remember, he fumbled after a long scramble against the Jayhawks and his accuracy the last three games of the year was really off the mark.  He may have played with the injury, but finally told the staff after the OU game?

Daniel is in Houston for this week’s East-West Shrine Game and will then go to Mobile, Ala.,  for the Senior Bowl on Jan. 24.