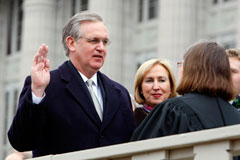 Nixon then addressed the crowd, striking the theme "A New Day for Missouri". Nixon says the difficult economic situation has united Missourians as never before.

"The challenges we face are historic. But so are the opportunities," Nixon told the crowd, bundled up to keep out temperatures in the 40s during the outdoor ceremonies.

"Today, we make a fresh start. It’s a day on which we separate the shortcomings of yesterday from the hope of tomorrow," Nixon said, "Today, we stop thinking about what should have been. And we start creating the future we all deserve. Today, we turn the page. Together, we mark a new day for Missouri."

Nixon stated that Missourians are hard workers, but that too many are working harder and not getting ahead. The new governor pledged to move the state into the 21st Century.

In the shadow of the Capitol, Nixon called for a new tenor in Jefferson City. He said that people who need help have no appetite for partisan bickering. Stating that not all answers will come from government, Nixon urged Missourians to get involved in community service.

"As your Governor, I will work every day to help make this brighter future a reality for all Missouri families," Nixon concluded, "I am honored and humbled by the opportunity to lead our state during this critical time.  As our family moves into the Governor’s Mansion, we do so knowing that it’s your house – not ours.  And we hope you’ll visit us often. And together, we will make a new day for Missouri."