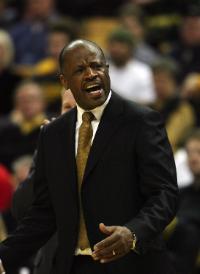 Missouri Tiger men’s basketball coach Mike Anderson insists this is no time to panic following the Tigers Big 12 opening loss at Nebraska on Saturday.  Anderson says despite the loss, he’s happy with where the team is at with Colorado coming up on Wednesday.

Anderson said this was only the second game in which his team didn’t come out and match the intensity of their opponent.  Of course, the other being against Illinois.

He’s right, in this game on Saturday the Huskers played aggressive defense, took the ball hard to the net and drew charges as Mizzou was never really able to get settled in a first half that saw them score just 18 points.

Listen below to coach Anderson’s comments.