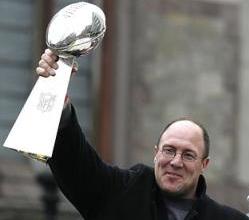 The Kansas City Chiefs may have the inside track on New England VP of player personnel, Scott Pioli as their general manager.  Pioli interviewed with the Chiefs last Monday and all signs point that the meeting went well.

While there is no contract yet, the Boston Globe is reporting that unless there is a change of heart from Pioli or a last ditch effort by New England to keep him, there shouldn’t be anything that stands in the way of Pioli joining the Chiefs.

The one early hang up could have come from the fact that Carl Peterson’s responsibilites were going to be split between two.  The financial side of Peterson’s job will be handed to Denny thum who is already in the organization.  Many questioned if Pioli would want to team with someone else because many experts were saying Pioli is a guy who would want tota control.