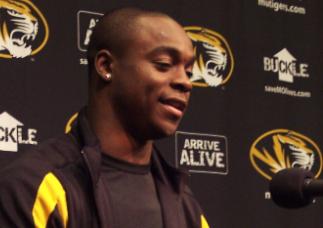 Calling his three years at Missouri, the best experience of his life, a choked up Jeremy Maclin declared,  "I’m entering the 2009 draft and hopefully start and excel in my pro career."  Watch a clip of Maclin getting emotional.  Click on the pic.

Maclin was emotional when he announced that he would forego his final two years of college eligibility to make himself eligible for the NFL draft.  Maclin’s voice quivered and he broke down at the podium.

He said he thought long and hard on the pros and cons for staying and going, but ultimately after talking with his coaches, Gary Pinkel, Andy Hill, David Yost, and Cornell Ford, (who told him to follow his heart), Maclin said he was ready for the next level.

Listen to Maclin’s emotional speech and head coach Gary Pinkel who comes in to finish things up after Maclin had to the leave.