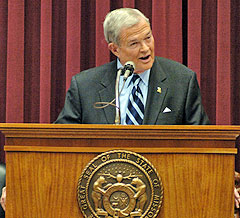 Sen. Christopher "Kit" Bond has formally announced that he will not seek re-election to the United States Senate.

Bond made the announcement in an address to the General Assembly at the Capitol in Jefferson City. Bond said though he will not seek re-election when his term expires in 2010, he doesn’t plan to retire, but will pursue other interests.

Bond made the announcement about 15 minutes into his speech, a speech in which he urged legislators to work together in the coming session. Bond stated that too much work is ahead for Republicans and Democrats to engage in personal attacks. Bond, a Republican, said he has served in a variety of political environments, both when in the majority and in the minority. He said he knew from experience that the two parties can work together to move the nation forward. [Photo by Tim Bommel]