After four terms as a United States Senator, two as Governor of Missouri, and one as Missouri State Auditor – Christopher “Kit” Bond wants to leave the spotlight behind and enjoy the rest of his life with his wife. 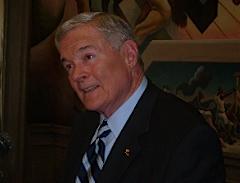 Bond met with members of the Capitol press corps shortly after speaking to members of the Missouri House, informing them he would not seek reelection in 2010. Bond says he had given some thought to running for a fifth term, but opted against it, hoping to work hard during his remaining two years on Capitol Hill and to “finish up strong.”

While Bond will not miss the weekly round trip flights between Washington, D.C. and Missouri, he will miss the challenges he faces every day on the job. Bond says there are problems that must be solved and he gets a great deal of satisfaction out of finding solutions and implementing them.

Asked about what is expected to be a hotly contested race to succeed him, Bond hopes a Republican primary – if there is one – should not be a “brusing primary.” He hopes candidates “stick to issues.”