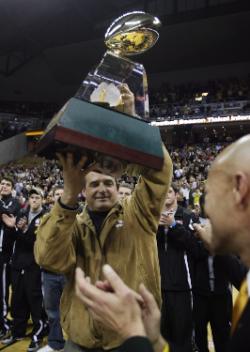 So what do you think should be the top sports stories of 2008?  Read along and see if you agree with me.  I guarantee you forgot the number one story for this year.  One of the most amazing stories I’ve ever heard.

#4 434,000 people from around the world and right here in Missouri watched some of the Tour of Missouri bike race making it Missouri’s largest international sporting event.

#2 the Missouri Tigers win two bowl games.  The Alamo Bowl and the Cotton Bowl over Arkansas,

The #1 sports story of 2008.  Its hockey.  Blues defensemen Erik Johnson lost for the year when he injures his right knee after getting his foot caught in a golf cart during a team bonding outing at the Lake of the Ozarks this summer.