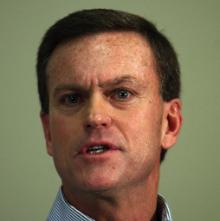 Newly named Rams GM Billy Devaney will have the job of finding the teams next coach.  He’s called upon a committee that will include former players Dan Dierdorf and Marshall Faulk to help as advisors.

Final input will come in from Chip Rosenbloom as well, but ultimately it will be Devaney’s call.  Devaney was with Atlanta when during the hiring process of their coach Mike Smith.

Devaney wouldn’t name other potential candidates other than Winston Moss, linebackers coach at Green Bay who will be in by the end of the week and Jim Haslett who will be considered a finalist.

Interesting side note.  Rex Ryan is the son of former Bears’ defensive guru Buddy Ryan of the famed 46 defense.  Leslie Frazier played for the Super Bowl team in 1985.  If Frazier would be hired as a head coach, he would be the third current NFL coach to play for the famous 46 defenses.  The other two.  Jeff Fisher of Tennessee and Mike Singletary of San Francisco.

Running back Jamaal Charles of the Chiefs and wide receiver Donnie Avery of the Rams lost out rookie of the year honors to quarterback Matt Ryan of Atlanta, no surprise there.

I was shocked when I heard late yesterday that the Broncos fired vice president and head coach Mike Shananan after 14 years as their head coach.  16-15 against the Chiefs.  Wouldn’t he look good walking up and down the sidelines in Arrowhead?

Former NFL wide receiver Andre Rison arrested for public intoxication in San Antonio.  Paid his $85 fine and went on his way.  Played three years with the Chiefs from 97 to 99.  Must have whooping it up a bit too much after the Tigers overtime win in the Alamo Bowl.