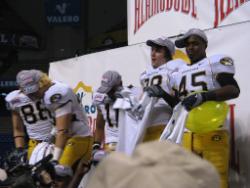 Chase Daniel tied a career high with three interceptions, but connected with Jeremy Maclin on a seven yard slant for his 101st career touchdown pass in overtime to help lead the Tigers to a 30-23 win over Northwestern.

Sean Weatherspoon and William Moore forced a fumble by quarterback CJ Bacher that was recovered at the NU 32 by a Wildcat lineman.  Bacher’s Hail Mary pass on 4th and goal was knocked down by William Moore giving Mizzou back to back 10 win seasons for the first time in school history.

It really was a tale of two halves.  In the first half, Northwestern was crisp on offense and they played with a lot of focus.  The same couldn’t be said for the Tigers who were called for three defensive offside penalties.  However, in the second half, Northwestern got flagged for seven penalties and field position really became the key for the Tigers in the 4th quarter as Mizzou managed to kick a field goal to tie the game at 23, then take advantage of a short field to set up what would have been Jeff Wolfert’s fourth field goal of the game, but he missed wide right from 44 yards to send the game in overtime.

CJ Bacher threw for a career high 304 yards and had three touchdown passes, all long passes.  The first to Eric Peterman from 35 yards out gave NU a 7-0 when William Moore slipped on NU’s opening drive off a Daniel INT.  Then in the second half, Bacher connected twice, once to Rasheed Ward for 46 yards after the Tigers blew coverage and then again late in the 3rd when Bacher found Ross Lane for 23 yards on a great catch in the endzone that put NU up 23-20.

Special teams play was huge for the Tigers.  After Mizzou went three and out and had to punt early in the fourth, Jake Harry lofted a punt inside the one that was downed by Tommy Saunders.  From that point on, the Tigers used the field position and NU’s penalties to their advantage.

Despite the miss with the chance to win the game, Jeff Wolfert hit three field goals from 31, 43, and 37.

The play that got Missouri back into it was in the final minute of the first half, when NU punted to Maclin when the ball should have been kicked out of bounds.  Instead Maclin took it 75 yards for Missouri’s first touchdown to tie the game at 10 at the half.  At that point, the Tigers looked out of sync and a step behind the quicker Wildcats.

Tyrell Sutton, the Wildcats top running back had a huge first half and finished with 114 yards, but the Tigers interior line led by Ziggy Hood really slowed up Sutton in the second half taking away their inside draw out of the shotgun.

Hood was all over the place inside.  Stryker Sulak put on tremendous pressure on
the outside and linebacker Sean Weatherspoon was all over the field and no doubt in my mind the MVP for the Tigers.

Chase Daniel never seemed to get in much of a flow.  Some of his passes were way off target and he got picked off three times, two of those which resulted from him making poor decisions.  Despite his off game, (27-44 for 200 yards, 2 TDs, 3 INTs) he made a couple plays when he needed whether hitting Chase Coffman or scrambling out of trouble, late in the game to keep drives alive.

Credit Northwestern.  They shut down Derrick Washington limiting him to 44 yards
on 22 carries.

I thought Mizzou may have turned the tide midway through the third, after Daniel hit
Danario Alexander for an 11 yard touchdown that put the Tigers up 17-16 right after NU took the lead.

Then Brock Christopher came up with an interception and the Tigers had the ball back
at the NU 34, but had to settle for a field goal that put them up 20-16.

One thing I said before the game was that if you let Northwestern hang around,
they could come back and haunt you and while the Tigers shut down their running game, Bacher continued to pick apart the Tiger secondary, but who hasn’t done that this year?

Still in the end, the Tigers prevailed and come away with a huge victory for this program and it send the senior off with a 3-1 bowl record.