Come the new year, Senator John Loudon (R-Chesterfield) will be a former Senator as his career as a lawmaker comes to a close. But the end of his legislative career does not put an end to some unfinished business. Loudon is waiting for the State Supreme Court to issue a ruling on one of his bills from 2005 – Senate Bill 1 – which makes it more difficult for employees to receive workers’ compensation benefits. The legal challenge was heard by the Supreme Court more than a year ago, but the parties in the case are still awaiting a decision. 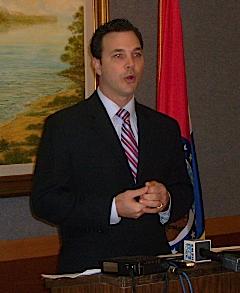 Loudon says he can’t imagine what is taking the Supreme Court so long to hand down a decision. He believes this is a record for the time between the hearing and the decision being rendered.

Supreme Court spokesman Beth Riggert, who is also an attorney, says there is no way to check on the reason for the lengthy time period because discussions among the judges are confidential. As for whether this is a record length of time, Riggert says, "We don’t track that information."

Riggert did offer a quote she has given to the media, in the past, regarding what some see as a delay. "While the court strives to decide cases as expeditiously as possible," says Riggert, The court will take as much time as it believes it needs to give proper consideration to all the legal issues the parties raise in a case, to reach the decision the law requires, and to explain the reasons for that decision in a clear and thorough manner."

As for Loudon, who has enjoyed successes in previous challenges to his bills, he’s hoping the Supreme Court will rule in his favor. But he’s not holding his breath. "Honestly … It might surprise. I’ve kind of moved on."

The earliest the Supreme Court could issue a ruling would be January 13th – the next scheduled date for what is called an optional hand down – meaning a final decision on a law passed in Loudon’s fifth year in the Senate will see the light of day until after Loudon has completed his eighth year in the chamber.

Previous Post: « Gonzalez wants the Chiefs to keep Herm
Next Post: Helping with heat in the cold »