Missouri is one of five states that are part of a national movement to reject a proposal to do away with the secret ballot rights of employees considering forming unions. While the movement is aimed primarily at rejecting a Congressional effort known as card check – a proposal to recognize a union as the employees’ bargaining representative without benefit of a secret ballot vote – it would extend to protection of all secret ballot voting. 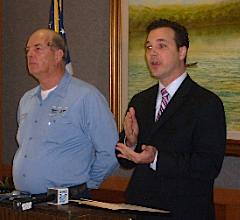 The grassroots movement is known as SOS Ballot – Save Our Secret Ballot . Two of the SOS Ballot Missouri Advisory Board members were on hand at the Secretary of State’s Office on Tuesday to announce the proposal – outgoing Senator John Loudon (R-Chesterfield) and Sedalia businessman Dave Rouchka.

They say elimination of the secret ballot leads to intimidation and harassment. Their goal is to collect enough signatures to place a proposed Constitutional Amendment on the 2010 ballot – a clause that would state the right of individuals to vote by secret ballot is fundamental and shall be guaranteed.

The ballot initiative must go through the review process before it can be certified to gather signatures.

According to Laura Egerdal with the Secretary of State’s Office: "It needs to be approved by both the Secretary of State’s Office and the Attorney General’s Office for form. That means it’s worded correctly, insertions are underlined, anything that’s being removed is in brackets – the very technical aspect. If it meets that hurdle, then we write the ballot summary language, which has to be less than a hundred words. And then at that point, after about a month, it would be certified to gather signatures in Missouri."