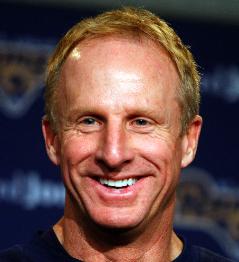 Chiefs head coach Herm Edwards, and Rams head coach Jim Haslett still had jobs as of Monday even though their futures were up in the air following 2-14 seasons.  However, three NFL coaches did not make the cut.

Romeo Crennel of Cleveland, Eric Mangini of the Jets and what a shock, Rod Marinelli of the 0-16 Lions all were let go Monday morning.  It is also being reported that Bill Cowher has no interest in coaching in Cleveland.   He told team execs he was happy spending time with his family in North Carolina.

Haslett was proud of the way his players ended the season, a close game against Atlanta saying, their effort showed the type of men they were.  The Rams started out 0-4 under Scott Linehan then won their next two games under Haslett before losing out.

Edwards said he was not concerned about his future and that he would be coming into the office today to begin player evaluations.

Listen to Tony Gonzalez discuss this past season.