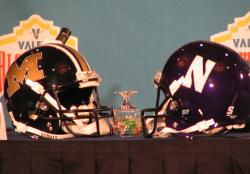 The only media activity today down in San Antonio for tomorrow’s Alamo Bowl between the Missouri Tigers and Northwestern Wildcats was a short visit from the head coaches, Gary Pinkel of Mizzou and Pat Fitzgerald from Northwestern.

Northwestern coach Pat Fitzgerald expects both teams will leave it all on the field and despite both teams being very similar, you can throw all of that out of the window.

Fitzgerald thinks both teams are explosive on offense and physical on defense, while very sound on special teams.

Pinkel thinks this is an important football game for so many reason as far as Missouri is concerned.  A win would end avoid a three game losing streak.  It would give the Tigers back to back 10 win seasons for the first time in school history and it would send these senior off the right way.

Listen to both Fitzgerald and Pinkel’s thoughts on tomorrow’s game.

Download/lsten to Pinkel and Fitzgerald (mp3)