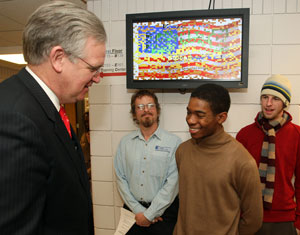 Governor-elect Jay Nixon has announced the initial steps of what he’s calling his Show Me JOBS initiative – billed as a bipartisan effort to get Missourians back to work. The proposal aims to create new jobs by supporting small-business development, providing incentives for worker training and re-training, expanding the Quality Jobs Program and bringing next-generation auto jobs to the state.

Among the early supporters of the plan is the Missouri Chamber of Commerce. Chamber President Dan Mehan says Nixon is moving quickly in the right direction.

Several Democrats have criticized the Chamber, in the past, saying it is too close to Republicans at the administrative and legislative levels. Mehan says in order for business to flourish in the state it is essential that economic plans move beyond Democratic and Republican partisanship. [ Photo: Bill Greenblatt, UPI ]