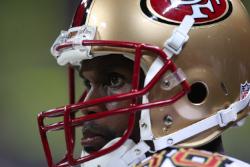 The San Francisco 49ers’ offense clicked just in time to erase a 13-point deficit, and former Rams’ receiver Isaac Bruce hurt his team as the 36-year-old wide receiver caught a touchdown pass and reached a pair of milestones during a late-game 17-16 comeback.

Bruce became the fifth player to reach 1,000 catches on a 3-yard touchdown grab with 4:03 to go and passed Tim Brown for second on the career yards receiving list on the 49ers’ go-ahead drive.

The Rams (2-13) squandered a 10-point halftime lead for the second straight week. They were ahead 16-3 with 11:36 to go, but failed to take advantage on four turnovers and four sacks. The losing streak is the franchise’s longest since moving to St. Louis in 1995.

Coach Jim Haslett said "We gave the game away."

Josh Morgan got the go-ahead score on a 48-yard reception with 1:22 to go from Hill, who threw a season-worst three interceptions before bringing SF back. Hill was 10-for-15 for 127 yards in the fourth quarter, and 18-for-34 for 216 yards overall.

The Rams got to their 48 in the final minute before Tarell Brown intercepted an off-target pass from Marc Bulger with 16 seconds to go.

Steven Jackson had 108 yards on 32 carries, his first 100-yard effort since Game 6 despite spending time on the training table with a sore left hamstring. Rookie Keenan Burton’s first career touchdown reception came in a 10-point flurry in the final 1:12 of the first half of the home finale.