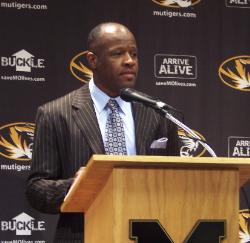 Missouri Tiger head coach wrote off the first half to PFS.  Post Finals Syndrome.  After having a week off and taking finals in the classroom, the Tigers rebounded after a slow first half to beat Stetson 78-44 Saturday evening at Mizzou Arena.

The Tigers were sluggish shooting just 31% in the first half and turning the ball over seven times.  It appeared at times as though Mizzou was playing a little too fast and out of control.  The Hatters tried to slow Mizzou down by playing a half court game as even though the Tigers couldn’t get their groove going on the offensive side, their defense was right on.  On Stetson’s first three possessions they were called with traveling trying to get around a fiesty Missouri defense.

The Hatters closed the lead to 27-18, but shot just 28% in the first half themselves.  The Tigers slowed things up, got into a half court offense and began to find their rhythm going on a 7-0 to start the second half.  DeMarre Carroll pounded the ball inside and Matt Lawrence drained a three and that set the tone for the 2nd half.

Stetson continued to misfire and finished shooting 27% from the game and a miserable 6% from three point range on 1 of 17 beyond the arc.

Carroll led the Tigers with 14 and Lawrence had 12.  Justin Safford provided the energy and spake Mizzou needed to get going.  He finished with 10.  Laurence Bowers and Keith Ramsey played well in the second half scoring a combined 14 points on 6 of 10 shooting with 9 rebounds.

This was a good tune up now for Missouri who moves to 9-1 and faces Illinois in St. Louis on the 23rd.  Listen to Mike Anderson’s post game comments below.