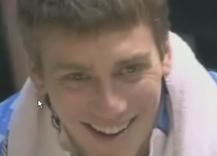 Hansbrough said he’s glad it’s over. He knew he was closing in on the feat, but once the media started bringing it up over the last couple of weeks is when Hansbrough admitted he started thinking about it.

Knowing he’d have a chance to break the record against Evansville, he said he was really nervous before the game and he’s sure it had something to do with closing in on the record.  He also was sure his dad would be there for the game, but he made a surprise visit and Tyler saw him in the seats before the game.

His coach Roy Williams has compared Hanbrough’s intensity with that of Michael Jordan.  Click to hear more from Tyler on his historic night.