The first unit of American National Guardsmen to teach improved agriculture techniques to farmers in Afghanistan arrives back in the United States today. The members of the first Agribusiness Development Team might be home in time for Christmas. 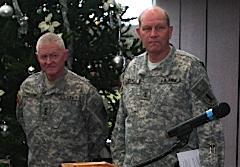 The Director the National Guard Bureau at the Pentagon, Lieutenant General Clyde Vaughn–a native of Dexter–says he got a call from the Secretary of the Army a couple of years ago wanting to know if the Guard had some farmers for a special project in Afghanistan. “We have 300,000 traditional soldiers (in the National Guard) that work for other folks out there. We have lots of farmers…,” he told a ceremony in Jefferson City today.

Vaughn says he immediately contacted the head of the Missouri Farm Bureau, Charlie Kruse, and Missouri’s Adjutant General, King Sidwell, to lay the groundwork for the unit that’s been in Afghanistan for a year.

Vaughn says he’s proud that most of the things created by Missourians in the program’s original concept have worked. Vaughn has told a special ceremony in Jefferson City, “It’s going to propel us in the direction many of us feel we have go to make a real difference in Afghanistan, which is the soft power, the caring about people and trying to fix the plight of the great number of the folks they have over there. It’s a great concept.”

Sidwell says the unit has helped win the heats and minds of the Afghans….in a way that has paid off broadly. “It helps in the cooperation of the local population in the intelligence resources that can be brought to bear. It makes friends when you might not otherwise be able to make friends,” he says.

Sidwell hopes to bring  some farmers from Afghanistan to this country for extended educational opportunities.