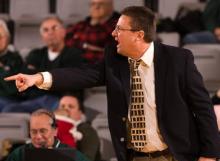 Bearcat forward Hunter Henry led all players with 23 points and a season-high 13 rebounds. It’s the second consecutive double-double for Henry, who has four in eight games this season and 19 in his four-year career.

Northwest (4-4) shot 50 percent from the field and had 25 assists against six turnovers in ending its first three-game losing streak in nearly three years. Mike Larsen had a season-high seven assists, and four points.

Dan Anderson scored all 16 of his points in the first half to lead the Owls. He hit four 3-pointers in the opening half, but was 0-of-5 in the second and finished 5-of-16 from the field. Zach Roling had 13 points and Justin Cornelius added 11 for William Woods (4-7).