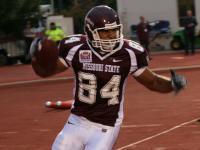 Missouri State tight end Clay Harbor has been named to the Associated Press FCS All-America Football Team.  He led the Bears with 40 receptions for 457 yards and is on the AP All-America second-team for the second year in a row.

Harbor was Missouri State’s only first-team All-Missouri Valley Football Conference selection in 2008. He earned the team’s Offensive MVP Award this season after leading league tight ends in receptions per game (3.64) and receiving yards per game (41.55).

This season, he extended his active streak to 22 consecutive games with at least one pass reception and posted a career high eight catches for 113 yards against preseason league favorite North Dakota State on November 15. He became the 15th Missouri State player to eclipse 1,000 career receiving yards and was a two-time Coors Player of the Week recipient this year.