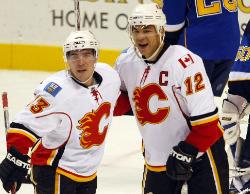 Iginla also assisted on a two goals including a power play goal that put the Flames up 4-2.  After Calgary jumped out to a 3-0 lead the Blues responded, with goals from Patrik Berglund and a power play goal from Brad Boyes.

Iginla finished with two assists for his 13th four-point game, tying a career high. That made it easy for goalie Miikka Kiprusoff to beat the Blues for the 11th straight time.  Iginla is one point shy of 800 for his career.