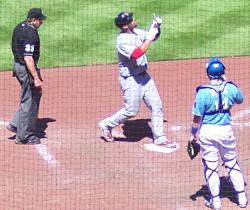 Albert Pujols was named This Year in Baseball’s Hitter of the Year as voted on by 12 million fans, the most ever for this award.  This is Pujols’ second time winning this award.

Pujols beat out Boston’s Dustin Pedroia.  Pujols brought in 19% of the votes.  Pedroia had 16.4 percent, followed by the Twins’ Justin Morneau, at 14.5 percent, and the Phillies’ Ryan Howard, at 13.1 percent.

Free agent pitcher Brian Fuentes who grew up in California said his first choice would be to pitch for the Angels, wanting to stay closer to home.  He grew up just outside of San Jose, about 300 miles from Anaheim.  The Cardinals have strong interest as do the Brewers and Tigers in acquiring Fuentes who would become the Cardinals closer if he signs.

Manager Tony LaRussa and pitching coach Dave Duncan are very high on Fuentes and have made their pitch to management to sign the lefty.