Three straight years of frustration become a fourth as the Northwest Missouri State University Bearcats played in their fourth consecutive NCAA Division II National Championship Football Game and went down to defeat for the fourth straight year. After two losses to Grand Valley State of Michigan in 2005 and 2006 and a loss to Valdosta State of Georgia last year, the Bearcats fell to the University of Minnesota-Duluth 21-14 Saturday at Braley Stadium in Florence, Alabama. 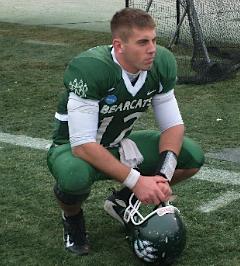 The Bearcats had difficulty moving the ball in the early going, failing to get out of their own territory. They picked up only 24 yards on offense. Fortunately, for Northwest, Minnesota-Duluth experienced problems on offense, as well, picking up only 66 yards, and the 1st quarter was scoreless.

NWMSU threatened early in the 2nd quarter, but a fumble inside the Minnesota-Duluth 20 kept the score at 0.

The scoring fast was finally broken with 14 seconds to go in the half as Minnesota-Duluth got on the board as quarterback Ted Schlafke filed a 38 yard TD pass to Tony Doherty. David Nadeau’s PAT made it Minnesota-Duluth 7, Northwest Missouri State 0 at the half. The Bearcats ended the half having fumbled 5 times, losing the ball only once. Quarterback Joel Osborn also had one of his passes intercepted.

The Bulldogs went up by two majors as they took advantage of Osborn’s second intercepted pass to set up a 9 play, 31 yard drive that culminated with Schlafke hitting Isaac Odim with a 5 yard TD pass. Nadeau’s extra point made it Minnesota-Duluth 14, Northwest Missouri State 0.

The next series of downs saw Blake Bolles take over as the Northwest signal caller. He started to move the ball but the Bearcat drive was stopped at the Bulldog 45 yard line when Northwest fumbled, losing possession for the second time in six fumbles.

The 4th quarter began with Minnesota-Duluth in possession, leading by a pair of converted touchdowns. They scored their final points just over a minute into the quarter as Odim scored his second touchdown of the day, this one on a 4 yard rush. Nadeau’s conversion made it Minnesota-Duluth 21, Northwest 0. 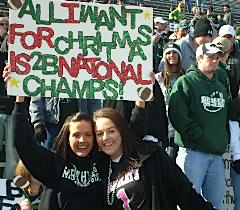 On NWMSU’s next set of downs Joel Osborn returned as QB. But the Bearcats were still unable to move the ball effectively. It took a defensive play to get Northwest on the board. With just over 8 minutes to play Aldwin Foster-Rettig stepped in front of a Schlafke pass, picked it off, and returned it 44 yards for a touchdown. Tommy Frevert’s extra point made it Minnesota-Duluth 21, Northwest Missouri State 7.

Northwest hit paydirt one last time as Osborn completed a 1 yard TD pass to Raphael Robinson with 1:39 remaining. Frevert’s extra point made it 21-14 and that’s how it stayed. An onside kick was recovered by the Bulldogs, who ran out the clock.

Minnesota-Duluth’s defense was superb, forcing 6 fumbles and picking off 2 passes.

Northwest Missouri’s record in National Championship Games is now 2-6, having won back-to-back titles in 1998 and 1999.