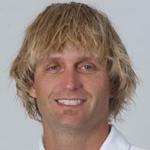 Yost came to Columbia on the same day that Pinkel arrived at Mizzou, and has served for the past eight seasons as quarterbacks coach and recruiting coordinator.

"I’m excited about having David take over the offense," said MU Head Coach Gary Pinkel.  He’s already had a huge role these past few years, much larger than people probably realize, in terms of game-planning and calling plays.  Having him move into this new role is a natural fit, and it will help us maintain the continuity of what is already a highly productive unit," Pinkel said.

My guess was that Yost was going to be named the new play caller.  Right before the Big 12 game when it was all but a done deal for Christensen, Pinkel said this would be an opportunity for someone within his program to move up.  While Pinkel never said Yost, it was pretty obvious he was the right choice.

"I’m very grateful for this opportunity and for the confidence that Coach Pinkel has shown me," said Yost.  "It’s been fun to be a part of all we’ve achieved the past few years, and I look forward to continuing to improve our system.  It’s a big responsibility and something that I’m ready to jump into full bore," he said.

Yost has spent the last 13 years on Gary Pinkel’s staffs at Toledo and Missouri.  He joined Pinkel at Toledo in 1996 as a graduate assistant coach, before advancing to the quarterbacks coach and recruiting coordinator from 1997 through 2000.  When Pinkel was hired as Mizzou’s coach in November of 2001, Yost came along with and has been the school’s quarterbacks coach and recruiting coordinator ever since.