The latest addition to the Division II College Football Hall of Fame is retired National Football League superstar Rod Smith, who set records with the Denver Broncos following a stellar career with the Lions of Missouri Southern State University. 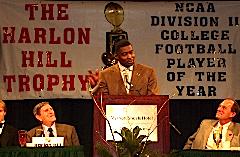 The induction ceremony was held Friday night in Florence, Alabama, prior to Saturday’s Division II National Championship Game between the Northwest Missouri State Bearcats and the University of Minnesota-Duluth Bulldogs.

While at Missouri Southern, the Texarkana, Arkansas native set conference records in career receiving yards (3,122) and touchdowns (35). He also holds school records for catches in a game (13), receiving yards in a game (254), and receiving yards in a season (1,439). This Division II standout graduated in 1994, then signed with the Denver Broncos, working out on the team’s practice squad. As many football fans know, Smith went on to have a 13 year NFL career, recording 849 receptions for 11,389 yards and 68 touchdowns – all Denver records.

In his acceptance speech, Smith spoke of the importance of young athletes having standards and living up to them. “It’s how you do it, not what you did,” said Smith. “That’s very important.”

Smith says the most important things were the team and the winning of game, with him representing his team, his community and his school. Those things came first.

Friday night also saw the awarding of the 2008 Harlon Hill Trophy as the Division II College Football Player of the Year. The award went to Abilene Christian senior running back Bernard Scott.