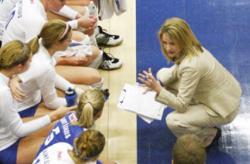 Kordes led the Billikens (29-5, 13-0 Atlantic 10) to one of their best seasons in program history in 2008. SLU became the first team to go unbeaten in A-10 competition since 1997, winning the regular season title for the first time in school history. Kordes led Saint Louis to a huge win over then-No. 3 Stanford early in the season that gave SLU it’s initial ranking in the Coaches Top 25 Poll. SLU went on to win the A-10 Championship  for its second NCAA Tournament berth since 2006.

The Billikens defeated Alabama A&M in the opening round for the program’s first NCAA Tournament victory before losing to Michigan in a thrilling five set match.

Billiken players cleaned up the awards too.  Sammi McCloud became the program’s first A-10 Player of the Year, Whitney Roth won her second straight Setter of the Year honor and St. Louis native Bridget Fonke won the A-10 Championship Most Outstanding Player award.

There were also several other volleyball student athletes from the state of Missouri who received end of the season honors from the AVCA and the Missourinet would like to recognize those athletes.

In the NAIA division, three received honorable mention nods.  They include Stacy Edwards of College of the Ozarks.  Flavia Lino of Columbia College, and Brittany Lukasek of Missouri Baptist.