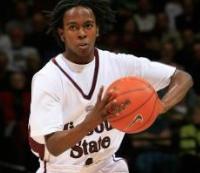 Derron Hobbs, a freshman guard on the Missouri State men’s basketball team, will leave  the Bears and return to his home in St. Louis at the end of this semester.

Hobbs had an ankle sprain and he missed three regular season games before seeing some playing time against Utah. He scored three points in the Utah game with a pair of rebounds and an assist and then scored five against Arkansas-Little Rock on December 3. He played on more time on the 6th against Arkansas State.

Hobbs told missouristatebears.com , "I appreciate the opportunity that Coach Martin gave me, but because of some personal circumstances, I have made the decision to move on."