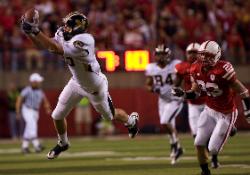 As if there was any question. Missouri senior tight end Chase Coffman has been named the recipient of the 2008 John Mackey Award, given annually to the nation’s top tight end.

Coffman, was announced as the winner at the College Football Awards Show in Orlando, Fla., beating out a pair of Big 12 Conference competitors, Jermaine Gresham of Oklahoma and Brandon Pettigrew of Oklahoma State.

He becomes the first Tiger to win a national individual position award, and he joins former standout Brock Olivo as the only Tigers to win national awards.  Olivo was the recipient of the Mosi Tutupu Special Teams Player of the Year Award in 1997. 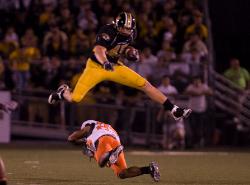 Here’s the cool thing about the award.  Tight ends are not invited to the show, but teammate Jeremy Maclin who was up for the Biletnikoff Award (for best receiver) was invited and brought Coffman along as a guest.

"I’m really honored by this, to win the award that says you’re the best in the nation at your position, it means a lot.  I’m really happy for my family and especially my Dad (Paul) who taught me so much about football," Coffman said.  Of course, he father played in the NFL with the Packers and then the Chiefs.

"I have to give a lot of credit to my coaches over the years, and definitely Coach (Bruce) Walker (MU tight end coach) and Coach Pinkel for giving me the opportunities they have at Mizzou…It doesn’t happen without a great quarterback like Chase (Daniel) and our great playmakers like Jeremy (Maclin) D-Wash (TB Derrick Washington) who draw attention away from me, and our offensive line which gives Chase time to make the throws.  I hope everyone takes some satisfaction in knowing they helped make this happen," he said.

Coffman won the award, despite being hobbled the entire last month of the season after suffering a sprained toe (turf toe) during a two-touchdown day at Baylor on Nov. 1 st .  The injury forced him out of subsequent games against Kansas State and Iowa State, and he wasn’t close to 100% for Kansas and Oklahoma.

Coffman had 83 receptions for 920 yards and 10 touchdowns.