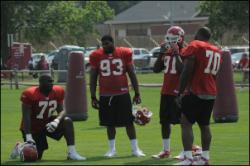 The Kansas City Chiefs have agreed in writing to move their summer training camp site from River Falls, Wisconsin to the Missouri Western State University campus in St. Joseph, Missouri pending a vote.

The Missouri Development Finance Board will vote on a $25 million state tax.  The board will meet next week in Jefferson City to consider awarding its tax credits to leverage a $50 million contribution from the Chiefs for improvements to Arrowhead Stadium and other ball park common areas.

In addition to promising to move their training camp, the Chiefs would also donate $10 million to Missouri Western.  The Chiefs would donate from the sale of the tax credits to Western for a new indoor practice facility, which would be the future training camp site starting in 2010 for ten years, if the facilities are constructed.

The proposal is a joint venture from the Chiefs and the Jackson County Sports Complex Authority, which owns Arrowhead.