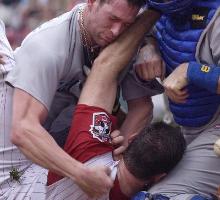 ESPN.COM is reporting that Kyle Farnsworth has agreed to a two-year, $9.25 million deal with the Royals, pending the results of a physical.  Farnsworth would answer KC’s needs for a right handed set up role in the bullpen.


In 10 seasons and for four teams, Farnsworth has posted a 30-48 record with a 4.47 ERA. Primarily used as a set-up man in his career, Farnsworth moved between roles with the Yankees last season but managed a 3.65 ERA in 45 games. He struggled with the Tigers, posting a 6.75 ERA in 16 games.

I most remember Farnsworth from his time with the Chicago Cubs when he spent time on the disabled list for breaking a toe after kicking a fan (not a spectator, an electrical device) after a poor outing at Wrigley Field.

Farnsworth is one of those pitchers that has blazing speed, consistently hitting in the high 90s, but has had control issues in the past.