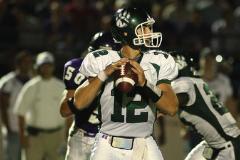 The Northwest Missouri State Bearcats are playing in their fourth straight Division II National Championship game this Saturday against Minnesota-Duluth.  The Bearcats are trying to avoid history by losing in four straight title games, joining the Buffalo Bills who lost four straight Super Bowls from 1991-1994.  10 things you should know about Bearcat football.

Listen to my Pressbox Podcast with coach Tjeersdma.

1 Saturday’s National Championship is a rematch of a 2002 first-round playoff game played in Maryville and won 45-41 by the Bearcats. The two teams combined for 1,032 yards of offense. Six touchdowns were scored in the third quarter. Northwest mounted a six-play, 61-yard drive in the final three minutes and scored the game-winner on a 3-yard dive by Geromy Scaggs with 31 seconds left.

2 Northwest is making its sixth appearance in the national championship game – the most by any school since Florence began hosting the game in 1986. Including a 2005 semifinal, the Bearcats are playing their fifth game at Braly Municipal Stadium in the last four years.

3 Half of the Bearcats last 10 games have been played against top 10 nationally-ranked teams (5-0). Northwest also has a win against No. 17 Central Missouri in that span. The Bearcats are 26-13 against top 10 teams under Mel Tjeerdsma.

4 Northwest is one of eight schools with multiple NCAA titles. A win Saturday would make Northwest one of four schools with three or more DII football titles.

6 A win Saturday would give the MIAA its fourth national championship. Pittsburg State won it all in 1991. The Bearcats won back-to-back titles in 1998 and 1999.

7 Northwest’s 34-point win against North Alabama is its largest margin of victory in postseason history (35 games).

9 Northwest (52.7 percent) and Minnesota Duluth (50.6 percent) rank first and fourth in the nation, respectively, in third down conversions. Both teams also rank in the top five in scoring (see page five).

10 Northwest has scored on all 17 red-zone chances this postseason (13 touchdowns, 4-4 FGs). The Bearcats are converting 90 percent of their red-zone opportunities on the year.