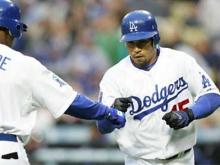 A deal that would have sent Mark Teahen to Chicago for middle infielders Ronnie Cedeno and Mike Fontenot appears to have faded off the radar.  Now the Royals are turning their attention to Dodgers’ free agent Rafael Furcal.

Royals’ GM Dayton Moore is looking for someone who can compliment Mike Aviles who has proven he is major league talent.  Since Aviles played shortstop, the same position as Furcal, my guess would be they would move Aviles to 2nd base.

There are three other teams interested in Furcal.  The Dodgers would like to keep him.  Oakland and Toronto reportedly have interest in him as well.  Furcal is a good defensive player with speed and a good bat.  He’s a career .286 hitter.

Moore is also denying rumors coming out of Las Vegas that the Royals were talking with the Braves about sending pitcher Zach Greinke to Atlanta for outfielder Jeff Francoeur.

Good thing, that would be a huge mistake.  Greinke was 13-10 and one of the top strikeout pitchers in the AL with 183 and 202 innings pitched.  Francoeur hit .239 last year dropping off in production from 2007.  There is also talk the Royals would be open to trading Jose Guillen.