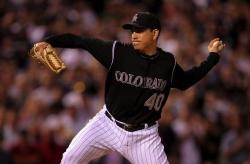 Apparently, the Cardinals put in a comparable bid for free agent closer Francisco Rodriquez who just signed for three years, $37 million with the Mets.  Now they are talking with Rockies free agent, lefty  Brian Fuentes about becoming the closer.

After players filed for free agency in November, it was no secret the Cardinals would need a closer.  GM John Mozeliak made it seem as though they would stay in house and give the job to someone like Chris Perez.

The Cardinals were saying they didn’t have the money to go after big free agents.  Now, after testing the trade waters this week in Las Vegas, it’s becoming apparent the Cards won’t be able to do much via the trade market, so they’ve turned their attention to free agency.

In terms of closers that are out there, I was surprised to hear that St. Louis made a serious run at Rodriquez.  Perhaps Mozeliak was doing some posturing saying the team didn’t have money to spend.

I wouldn’t expect to hear something on a Fuentes deal until the Cardinals see what happens to Kerry Wood.  It’s reported that he’ll sign with Cleveland with numbers being in the two year range at $8 million.  I would then guess that if anything happens with Fuentes, it will come after those two closers are signed with Fuentes falling somewhere in between Wood and Rodriguez in dollar figures.  Perhaps around the $12-$16 million mark.

The New York Post also running a story that the Tampa Bay Rays and four other teams have interest in trading for outfielder Rick Ankiel.