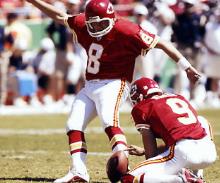 The NFL will announce their Pro Bowl team next week and it appears that Chiefs veteran tight end Tony Gonzalez will make it for the 10 th time…and not because it’s just a popularity thing either.  His stats are right up there with past years.

With three games left to play, Gonzalez has78 catches which is better than six of his other Pro Bowl seasons.  His 879 yards third from the bottom but he still has games left and this will probably be his fourth best year in that category.  He also has seven touchdowns this season.

The NFL’s all-time leading scorer Morten Anderson announced his retirement after not catching on with a team this year.  Anderson played for five teams for 25 seasons including two with the Chiefs.