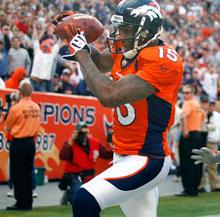 Once again the Chiefs could not finish off a game in the second half, failing to score after holding a 17-10 halftime lead.  The Broncos beat the Chiefs 24-17 on a long fourth quarter drive led by quarterback Jay Cutler.

Cutler led the Broncos on a tiebreaking 95-yard touchdown drive early in the fourth quarter and Denver’s defense stuffed quarterback Tyler Thigpen on fourth-and-goal to rally past the Chiefs 24-17 on Sunday.

Cutler completed 32 of 40 passes for 286 yards and two touchdowns, both of them to Brandon Marshall, including a 6-yarder for the winner early in the fourth quarter.

After punter Dustin Colquitt pinned the Broncos at their 5, the Broncos drove 95 yards in a 12 plays.

Thigpen drove the Chiefs all the way to the Broncos 5, where his draw on fourth-and-goal was snuffed out by cornerback Dre’ Bly at the 1.

Tony Gonzalez, who held extended film meetings with Thigpen earlier in the week and was confident he and the young quarterback were on the same page caught five passes for 73 yards including a great diving catch he made along the sideline.  It’s been enjoyable to watch Gonzo this year.  Here’s a guy who wanted to be traded, was upset that GM Carl Peterson didn’t do enough to trade him, yet busts his tail every game.