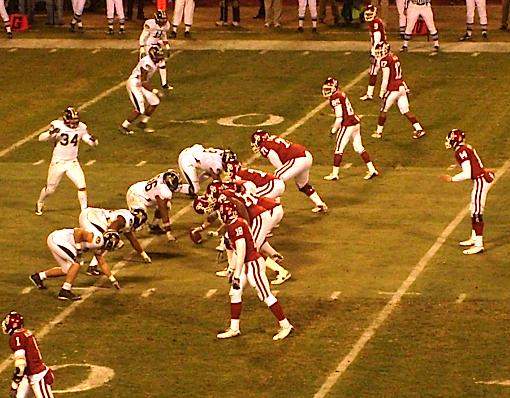 The Oklahoma Sooners picked apart the Missouri defense and the Mizzou offense could not keep up with an OU defense that was flying around the field.  The Sooners win the Big 12 Championship for the second year in a row with a 62-21  win in front of 70,004 at Arrowhead Stadium.

The Sooners started the game from their own 36 wasting no time driving down the field setting up with a first and goal at the Missouri 8 yard line.  After two incomplete passes in which Sam Bradford missed bad on two short passes, he found tailback Chris Brown who was stopped short at the two after being hit out of bounds by cornerback Tru Vaughns getting the start for the injured Castine Bridges.

It was a mini battle won by the Tigers who held OU to a knuckleball field goal that just cleared the crossbar giving OU a 3-0 on a 20 yard field by Jimmy Stevens.

The Sooners who have struggled on kickoff returns kicked away from Jeremy Maclin to give the ball to the Tigers on their own 39.  The Tigers got Derrick Washington involved right away calling his number on each first down play with two runs and a screen pass.  Mizzou drove down to the Sooner 26, but Chase Daniel was dropped on a quarterback draw on third down at the 30 and Jeff Wolfert was just short on a 47 yard field goal and MU came up empty handed on their first possession with 7:02 to play in the first quarter.

The Tigers defense came up strong holding OU to a three and out and forcing two incompletions from Bradford and getting an unsportsmanlike penalty on wide receiver Ryan Broyles backing OU to their 15.  A bad punt gave MU great field position at the OU 41.

The Tigers were stopped three and out and a punt set up OU at their own 10 yard line.  Chase Daniel was drilled in the mouth by safety Quinton Carter after Daniel tried to scramble on third and ten.  For the second straight series, the Tigers were unable to take advantage of good field position.

The Sooners went down the field with ease as Chris Brown faked out linebacker Sean Weatherspoon to go in untouched to put OU up 10-0.  The Sooners used just 8 plays to go 90 yards in 2:34.

On the Tigers ensuing drive, Chase Daniel was sacked again forcing a third and 10.  The Sooners were harassing Daniel most of the game, but Daniel found Tommy Saunders for a gain of 16.  A pass interference call put Mizzou at the OU 42, and the Tigers were faced with a 3 rd and 9 at the end of the first quarter.

Daniel completed another three down pass to Saunders.  Faced with a third and three, the Tigers tried a trick formation to get a quick pass to Washington, but got called for an illegal formation penalty pushing Mizzou back to a 3 rd and 8.  Daniel hit Maclin over the middle for a 27 yard touchdown who outran the secondary to get the Tigers on the board with 13:09 to play in the first half.  The drive covered 9 plays 72 yards in 3:48.

After a 15 yard penalty was assessed to the Tigers after the touchdown, Wolfert kicked off from his 15 and the Sooners started at their own 46 on the next drive.   The Sooners moved to the Tiger 10 and on 3 rd down, again the Tigers could put no pressure on Bradford as the secondary did a good job of covering the receivers, but after Bradford set up and waited, he eventually found Juaquin Iglesias open in the endzone.

There were five personal foul penalties called in the first 19 minutes of the game as play was choppy.  In fact, the head referee Randy Christal called the OU offense and MU defense to the line and told each team to clean up their act.  Didn’t matter, because Iglesias was flagged for unsportsmanlike conduct after scoring and OU had to kick off from their 15.

Maclin took the short kick past midfield to start at the OU 46.  It was just a matter of time before the wheels came off for Daniel.  Safety Nic Harris popped the ball loose on a Daniel run and the Sooners took over at MU 49.  when Bradford hit Broyles with a 29 yard pass for first and goal.   On third and goal it was Bradford back to Iglesias and the route was on with 8:59 to go in the first half and the Sooners up 24-7.

After the Tiger punted the Sooners drove to the MU 39 and were faced with a 4 th and five and Bradford completed the pass to Broyles for a first down and OU was moving again after starting at their 10.  The Sooners meticulously picked apart the MU defense as Mossis Madu added to the blowout with a 12 yard run capping off a 90 yard drive in 15 plays in 4:52.

Daniel’s turnover problems continue as he was picked off by cornerback Brian Jackson and OU took over at the 28.   Bradford drilled a pass to Broyles down to the six.   Chris Brown ran in the final six yards to go up 38-7 ending the first half.

The Tigers took the ball to start the second half and got out to midfield before the drive stalled forcing a punt to give the Sooners the ball at the 22.  OU started with four straight runs and a screen pass, but then mixed in some pretty pass plays again to drive down to the Mizzou 13.  OU kicked a field goal to go up 41-7 with 9:00 to play in the third.

On the Tigers, next possession, MU went for it on 4 th and 7 from the OU 38 and Daniel found Saunders for a gain of 15 to keep the drive alive.  Daniel then hit Saunders three plays later to put Mizzou on the board making it 41-14 with 3:59 to go.

The Sooners continued to move the ball and run the clock down keeping possession into the 4 th quarter.  20 seconds into the 4 th , Madu scored again and OU was up 48-14.

The Tigers drove down again for a touchdown as Chase Coffman caught a touchdown pass with 11:07 to play.  The Sooners answered that call with another sustained drive of their own to make it 55-21.   OU scored again late to become the first team in NCAA history to score 60 or more points in five straight games.